MCWL_113: In the field near Gaines Mills VA June 4, 1864; to Mrs. Gould from reporting death of George W. Gould in battle from Commissary Sergeant John Simonds

I have sad news for you. Your son George W. Gould was killed and left on the battlefield during a furious charge on a rebel work yesterday morning. We were repulsed & it was impossible to bring his body off of the field. The enclosed diary was in his breast pocket &it tells where the ball hit him. He was a good soldier always doing his duty. You have the consolation that he was a christian soldier too & has only gone before. 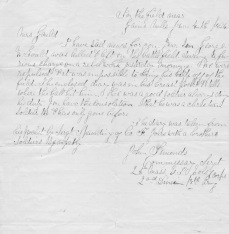 The diary was taken from his pocket by Sgt. Spalding of Co. F Yours with a brother Soldiers Sympathy